Careful observers will have noticed that libraryofbabel.info uses a different alphabet than Borges’ story as the basis for its iterations. We’ve adopted the same simplified punctuation scheme - space, comma, and period - but included all 26 letters of the English alphabet. Borges’ librarian-narrator tells of only 22 letters among the endless hexagons of books.

Borges accounts for these 22 letters in his essay “The Total Library”, a precursor to the short story. The essay charts the history of the idea of language as a mere combinatorics of letters or words from its beginnings in Aristotle’s account of the Atomist philosopher Leucippus through the present day. Presumably Borges is starting from the 30-letter modern Spanish alphabet, and rejecting the double letters (ch, ll, rr) as unnecessary along with the ñ. The remaining 26 include k and w, which appear only in loan words. Borges then removes q as “completely superfluous” (debatable) and x as merely “an abbreviation”. In English this would refer to the combination k-s, though in Spanish it may have other values.

Borges attributes this refining of the characters to an essential 22-letter set to early 20th-century German science fiction writer Kurd Lasswitz. Lasswitz wrote a story in his collection Dream-Crystals which Borges acknowledges as an influence, “The Universal Library”. Much in the story is reminiscent of “The Library of Babel”. As a publisher, a professor, and his sister discuss the idea of the total library they realize it will contain all the lost works of ancient authors, “the Universal Declaration of Peace, the history of the subsequent wars”, the library’s own catalogue and index, as well as every possible incorrect and misleading catalogue, and when the publisher encourages the professor to write down this vision the latter replies: “your readers will conclude that this is an excerpt from one of the superfluous volumes of the Universal Library.”

Despite their similarities, one thing is absent completely from Lasswitz’ story: a 22-letter alphabet. The Professor does not imagine reducing the character set below 100 figures, including far more punctuation than Borges will allow, upper- and lower-case letters, and even some figures for scientific notation. It seems Lasswitz’ professor is more concerned with tidy sums than efficiency: he proposes permuting the 100 characters over 500 pages of 40 lines each, with 50 characters per line. This gives exactly one million characters per book and 1001000000 possible books. Whether or not this is more elegant than Borges’ 251312000 is a matter of taste. 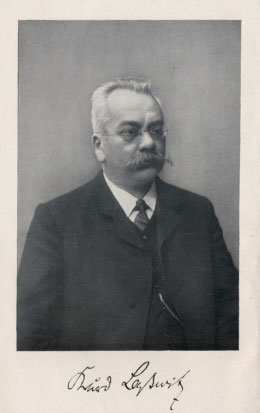 There’s another author who refuses to admit only 25 characters in his universal library: Borges. His story, framed as a librarian’s manuscript appended by an “editor” who is likely Borges himself, contains numbered footnotes, several eñes, an umlaut, and an epigraph which declares, “by this art you may contemplate the variation of the 23 letters.”

The umlaut appears in the title of one of the library’s countless volumes: Axaxaxas mlö. This phrase appears in a similarly themed tale of Borges’ from The Garden of Forking Paths, “Tlön, Uqbar, Orbis Tertius”. In this story, Borges discovers several texts describing a fictional culture, and Axaxaxas mlö is part of an oddly poetic phrase from their language. The epigraph of “The Library of Babel” also refers to another text, Robert Burton’s The Anatomy of Melancholy. Not only does the citation contain two forbidden characters, but they number the elements of a different alphabet: 23 letters. This sum refers to classical Latin, which lacked J, U, and W. (J was originally a swash I, I written with a curlicue when it appeared at the end of the line and having the same pronunctiation; thus the inscription INRI - Iēsus Nazarēnus, Rēx Iūdaeōrum, or Jesus of Nazareth, King of the Jews).

Something very strange takes place between Borges’ two texts. In his essay “The Total Library” he affirms that 25 chracters could “encompass everything possible to express in all languages” while in “The Library of Babel” he subjects the same notion, now in the hands of his narrator, to a gentle irony. Not only are 25 characters too few for the entirety of linguistic expression, they are too few even for Borges’ brief fiction. He thereby satirizes the idea of a possible saturation of linguistic expression, reminding the reader that the vectors of meaning-creation are too many (or too few - more or less than one) for any combinatorics to exhaust.

We’ve decided to use a 26-letter alphabet to acknowledge the implicit Englishness of our library (one might think of it as Engl-ish). There are as many possible “total” libraries as there are character sets, and there is no limit on what could be included. The permutations of an ideographic writing system, for example, would be fascinating to undertake. All this is simply to acknowledge our library as a work in progress, and to make known our hope that others will develop it in any of its countless possible directions.