The Library of Babel is described by Borges as a series of interlocking hexagons, each with four walls of bookshelves and two walls opening onto passages to the next cell. Why hexagons? There’s certainly an iterative nature to the construction, something which, like the library’s many books, may repeat endlessly though devoid of any meaning.

The structure is also reminiscent of a beehive, right down to the bustling librarians who comb the stacks in each cell. Bees have represented, throughout a vast history of thought, a society highly organized and hierarchized yet devoid of reason. Two thinkers as seemingly distant as Aristotle and Marx (and there are many besides) harvested the same nectar as philosophical beekeepers. 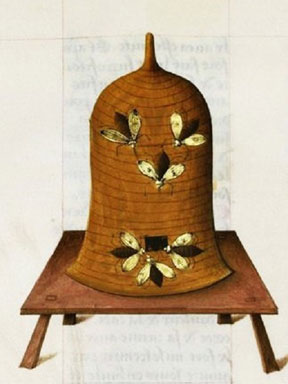 Hence it is evident that the state is a creation of nature, and that man is by nature a political animal...Now, that man is more of a political animal than bees or any other gregarious animals is evident. Nature, as we often say, makes nothing in vain, and man is the only animal whom she has endowed with the gift of speech. And whereas mere voice is but an indication of pleasure or pain, and is therefore found in other animals (for their nature attains to the perception of pleasure and pain and the intimation of them to one another, and no further), the power of speech is intended to set forth the expedient and inexpedient, and therefore likewise the just and the unjust. And it is a characteristic of man that he alone has any sense of good and evil, of just and unjust, and the like, and the association of living beings who have this sense makes a family and a state.
-Aristotle, Politics 1253a

Labour is, in the first place, a process in which both man and Nature participate, and in which man of his own accord starts, regulates, and controls the material re-actions between himself and Nature. He opposes himself to Nature as one of her own forces, setting in motion arms and legs, head and hands, the natural forces of his body, in order to appropriate Nature’s productions in a form adapted to his own wants. By thus acting on the external world and changing it, he at the same time changes his own nature. He develops his slumbering powers and compels them to act in obedience to his sway. We are not now dealing with those primitive instinctive forms of labour that remind us of the mere animal. An immeasurable interval of time separates the state of things in which a man brings his labour-power to market for sale as a commodity, from that state in which human labour was still in its first instinctive stage. We pre-suppose labour in a form that stamps it as exclusively human. A spider conducts operations that resemble those of a weaver, and a bee puts to shame many an architect in the construction of her cells. But what distinguishes the worst architect from the best of bees is this, that the architect raises his structure in imagination before he erects it in reality. At the end of every labour-process, we get a result that already existed in the imagination of the labourer at its commencement.
-Karl Marx, Capital Vol. 1 Pt. 3 Ch. 7 §1

For Aristotle, part of the uniqueness of the human being among animals is her being a political animal. Beyond the formation of a government, political here refers to the polis as a whole, the communal life which is essential and natural for the human being. Aristotle associates this directly with logos, a word with vast resources in ancient Greek, encompassing both language and reason. Other animals have mere phonē and can express only immediate reactions, pleasure and pain, whereas the human being has logos, and can discern good from bad, just from unjust. The political animal is the rational animal, and indeed human society has as its end not mere life or survival but the good life, the just life. In order to preserve this exceptional status as uniquely human, Aristotle must account for seemingly social animals like the bees. They may communicate, but they do so like automata, reacting instinctively out of pleasure or pain, without consciousness, self-consciousness, or reason. Likewise, they may form complex and hierarchized social groupings, and may even do so towards a common end, but that goal is never and can never be the good or just life. 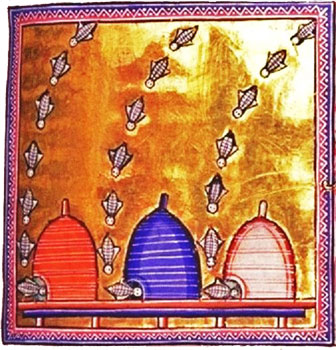 The citation from Marx shows the extent to which he remains within this tradition of thought. Marx acknowledges, in Capital Vol. 1 (ch. 1 §3), the fundamental place of Aristotelian concepts in the formation of economic science. He claims, however, that Aristotle failed to become conscious of the labor theory of value because the Ancient Greeks were a slave-owning society. Marx would seem, in Capital and throughout his career as a thinker, to be overturning the philosophical tradition, understood as ideology; his philosophical apiary belies a profound continuity, however. Human and animal, though their communal activity (here defined as labor) may appear similar on the surface, differ because one is animated by reason and consciousness. Though we cannot develop it fully here, this incorporation of the traditional definition of man as rational animal supports the entirety of the labor theory of value, Marx’s critique of capital, and the vision of a communist society free of alienated labor.

Many thinkers could have been mentioned here as examples, but these two suffice to show that throughout a long history and across apparent ideological divides, the bee serves as example when one must reinforce the definition of the human as rational animal. (The first to question this complicity was Derrida in The Animal that Therefore I am.) But Borges’ brief story deconstructs each of these binaries: language/sound, rational/irrational, and human/animal. The random creation of the library’s texts shows that even the most complex achievements of human “reason” are equally possible without any animating consciousness or any intention-to-signify at all. The life of us bibliotecarios is no more justified and no more good than that of the bees. And who’s to say a bee doesn’t believe his vindication awaits in the very next hexagon? 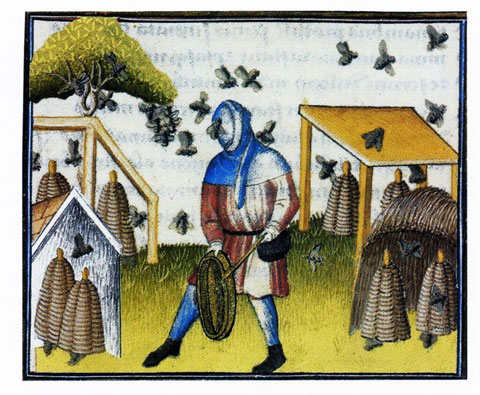