The Library of Babel is a place for scholars to do research, for artists and writers to seek inspiration, for anyone with curiosity or a sense of humor to reflect on the weirdness of existence - in short, it’s just like any other library. If completed, it would contain every possible combination of 1,312,000 characters, including lower case letters, space, comma, and period. Thus, it would contain every book that ever has been written, and every book that ever could be - including every play, every song, every scientific paper, every legal decision, every constitution, every piece of scripture, and so on. At present it contains all possible pages of 3200 characters, about 104677 books.

Since I imagine the question will present itself in some visitors’ minds (a certain amount of distrust of the virtual is inevitable) I’ll head off any doubts: any text you find in any location of the library will be in the same place in perpetuity. We do not simply generate and store books as they are requested - in fact, the storage demands would make that impossible. Every possible permutation of letters is accessible at this very moment in one of the library's books, only awaiting its discovery. We encourage those who find strange concatenations among the variations of letters to write about their discoveries in the forum, so future generations may benefit from their research. 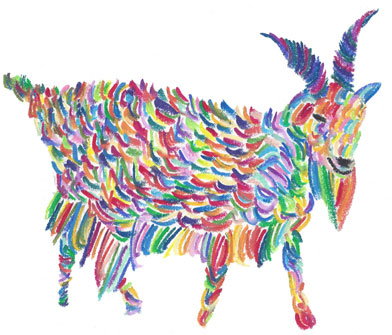 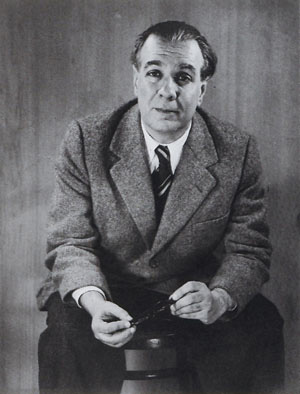 Jorge Luis Borges is without doubt one of the most influential and innovative authors of the twentieth century. He is best known for his many short stories, each of which creates a sort of ontological thought experiment in a few brief pages. He wrote poetry and non-fiction as well, reflecting on his immense knowledge of world literature. “The Library of Babel” (“La Biblioteca de Babel”) is one of his best-known and most loved pieces, from the 1941 collection The Garden of Branching Paths. It describes a version of a universal library, containing books with every possible combination of 410 pages of letters, thus containing every book that ever has been and every book that ever could be written, drowned out by an immense quantity of nonsense.

Borges was Argentinian, and aligned himself with many of the country’s right-leaning politicians. He began losing his sight in his thirties, and was appointed director of the national library after Perón’s exile, despite being completely blind. The librarian who narrates “The Library of Babel” references this condition: “Now that my eyes can hardly make out what I myself have written, I am preparing to die…”

When I first launched this website, it included here a quotation from Borges' 1939 essay “The Total Library” (“La Biblioteca Total”), precursor to his short story, where he describes the contents of the universal library. It would include everything: the minute history of the future, The Egyptians of Aeschylus, the precise number of times the waters of the Ganges have reflected the flight of a falcon, the secret and true name of Rome, the encyclopedia Novalis would have written, Borges' dreams and daydreams in the dawn of August 14th, 1934, the demonstration of Pierre Fermat's theorem, the unwritten chapters of Edwin Drood, those same chapters translated into the language of the Garamantes, Urizen's Books of Iron, the premature epiphanies of Stephen Dedalus that would mean nothing before a cycle of a thousand years, the gnostic gospel of Basilides, the song the sirens sang, the faithful catalogue of the library, and the demonstration of the falsehood of this catalog.

As I said, this quotation was included when the site launched, but unfortunately the lawyers of Borges' literary estate asked for it to be removed. His estate has opposed every genuine tribute to Borges' legacy out of the misguided notion that they will profit more from his books if no one else can so much as reference them. For a sense of the absurd lengths to which they have carried this quest, take a look at what they have done to the brilliant work of Pablo Katchadjian, El Aleph engordado, and pause for a moment to honor the lost legacy of Norman Thomas di Giovanni.

Borges co-authored translations of the majority of his work into English with his friend di Giovanni, with whom he shared a generous 50/50 profit-sharing agreement. After Borges' death, the publisher, in collaboration with his estate, allowed these works to go out of print and commissioned the Hurley translations in order to keep more of the profits for themselves. He was also prevented from re-publishing his work or publishing translations he wrote subsequent to Borges' death. We can at least take solace in the certainty that Borges' legacy will outlast these heirs, despite their best efforts.

libraryofbabel.info is the creation of Jonathan Basile (@jonothingEB/jonathanbasile.info), along with the help of my friends and family. I was drawn to the idea by an interest in literature and iterability, which I suppose I might as well call iterature. I hope you find the library aids your meditations, and please let me know via the forum or email (jonathan [dot] e [dot] basile [at] gmail [dot] com) what thoughts it brings. I am currently a Ph.D. student in Emory's Comparative Literature department, and have mostly shifted my focus from programming to writing. You can find links to my work on my website, including a book based on this project, Tar for Mortar: "The Library of Babel" and the Dream of Totality.

Not sure where to begin? 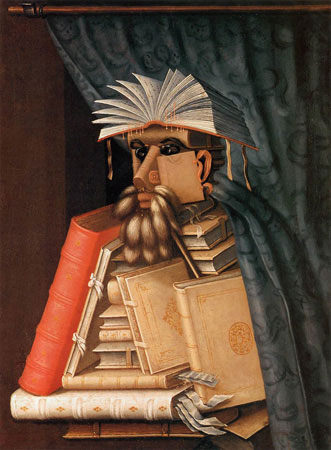